Six weeks ago, my 10-year-old torbie, Coco, disappeared. She hasn’t returned home yet, and she may not. Ok, at this point, she likely won’t.

My husband and I live in a densely populated urban neighborhood, sandwiched in between two main streets with heavy traffic and frequent construction. Coco spends the bulk of her days (and, sometimes, nights) gallivanting around the yards and driveways of our immediate city block. She has a kitty window open just wide enough for her 8-pound feline frame to squeeze through, and uses it daily.

A born survivor, she avoids moving cars, keeps a safe distance from other furry animals, and approaches humans with a healthy dose of caution. We worried about her penchant for tree climbing and snarling at other neighborhood pets, but never about the possibility of being hit by a vehicle or snatched up by a (non-human) predator.

My husband saw her last during a midweek, sunny, March afternoon. She was on the sidewalk in front of our neighbor’s house, rolling in the dust and debris like a maniac–one of her favorite pastimes. My husband thought little of it, that familiar scene, one he assumed he’d witness a thousand times more in the days and years to come.

I can’t remember the specifics of my last Coco sighting. It was that same morning, before I ran some errands. I didn’t think to pick her up and say good-bye, shove my face into her personal kitty space, to which she inevitably holds up a paw–no claws–and pushes it to my face as if to gently say, “Mom, I know this is how you express love, but please stop.”

For a couple weeks, anytime I spotted movement–a leaf blowing across the driveway, a robin bobbing across the yard, a neighborhood rodent scurrying under a parked car–from the corner of my eye, I jumped and moved toward it, assuming it was Coco, even when my logical brain knew that was unlikely.

I’ve told friends and family about the disappearance, usually with a stoic, matter-of-fact tone, focusing primarily on the details of the situation, and less on my feelings around it. I’ve had several cats throughout my lifetime, most in a rural environment, and all of them have either disappeared (fisher cat or coyote, most likely) or died (car accident, euthanasia).

I know the drill. I knew the risk when I adopted a pet. I accepted the likelihood that I would outlive my pe.

My father insists she was likely hit by a car. I quietly disagree.

My sister believes she will return in 10 months, the way one of her cats did last year after it found a new home. I wonder.

My bff reserves judgment, and expresses disbelief at the lack of emotion I have displayed. I rationalize.

My neighbor (let’s call her Alison) is convinced that we will track her down and bring her home. I feel touched by her infectious optimism.

She loves Coco perhaps even more than my husband and I do. Alison told me that her bond with our cat is what convinced her and her boyfriend to adopt their own.

When I told her that Coco hadn’t returned home after two days, Alison sent out the bat signal. Casting a wider net than I could have imagined, she informed and perused myriad platforms and resources.

Armed with packing tape and a staple gun, she braved New England March weather to post flyers around our neighborhood with me. More than once. The long walks provided an opportunity for us to get better acquainted and discuss all things cats. I introduced her to the Facebook page CocaineKitties. I recommend it to all.

Last week, I texted Alison that I was beginning to accept the potential permanence of the situation. She asked if she could still post updates online. I said of course, and that I just wanted to prepare her for an eventual sense of closure.

Three hours later, I heard a knock on my front door. When I opened it, a bouquet of cut flowers graced my porch. On the card was a heartfelt message from Alison, her boyfriend, and their cat, expressing sympathy for Coco’s disappearance.

I smiled. Then I texted her a photo of the gorgeous arrangement.

She texted back a video she had taken of Coco pre-disappearance.

I cried a little. Then a bit more. Then I ugly cried for two minutes, which felt like an exhausting and cathartic two hours.

I’m working through the five stages of grief, and am on the precipice of acceptance.

Accompanying that is a melancholia that seems frivolous, even indulgent, especially right now. In this unstable world with unspeakable suffering.

And yet, I miss her terribly.

When I look online for adoptable cats, I want every single one of them. I also want none that aren’t Coco.

My beau and I have a cat. Her name is Coco, and we adopted her in 2010. She is an indoor/outdoor type, not unlike her adoptive human caretakers.

As we have doors and windows that allow for privacy within our home and access to the world beyond them, Coco too has a tiny window that remains open just wide enough to allow her eight-pound frame to enter and exit as necessary (or preferred). It is conveniently located along the wall of our only indoor stairway, and one factor weighed in our decision to move into our current home.

We make executive decisions to close the window when the New England winter temps start to hover around freezing. Those moments have been fewer and farther between this year than in winters past, so Coco has enjoyed ample freedom in recent months to gallivant around the neighborhood even more than usual.

During extended absences–more than three days–kitty daddy (let’s call him KD) and I ask our friendly neighbor and fellow cat owner to check in on Coco. We leave the kitty window cracked, at least during the milder months, and ask our sitter to freshen the water bowls, top off the food supply, and provide any level of companionship that she and Coco may desire.

More often than not, Coco is out and about, flirting with passersby (of the people variety, not fellow felines), rolling around on the dusty sidewalk (a habit the pleasure and purpose of which still elude me), and hunting rats (a genetic instinct that remains intact despite her frequent indoor meals of processed morsels).

KD and I recently returned from a week away, during which our cat sitter (let’s call her CS) would pop by on her way to or from home to hydrate our aloof and unappreciative feline. KD is superb at showing extra love, sitting with Coco if she happens to be indoors and feeling sociable, and brushing her winter coat with a Furminator, the best pet investment we have made since adopting our little shedder over a decade ago.

When KD and I walked in the front door, we switched on a few lights, turned up the heat several degrees, and started calling to Coco. After no sightings of her, we deduced that she was still out and about, no doubt enjoying the unseasonably balmy March day. After nearly an hour, though, we found the lack of Coco cameos strange. She had not yet made an appearance, even a brief one, to check in, scarf down some Meow Mix, and glare at us before scampering out her window for some nocturnal pandemonium.

As though on cue, KD and I, almost simultaneously, crouched down to peer under the sofa. Sure enough, Coco sat on her fuzzy bed we had placed near one of the heating vents. She looked in our general direction, and might have given us the finger if:

1.) she had a finger to give
2.) she could be bothered to summon the energy

At KD’s behest, I continued to give her a wide berth. In most cases, if given enough time and space, Coco finds her way to us on her own accord.

Sometimes, though, I force the issue. I  steamroll her with affection and displays of unrequited love. After a week away, I wanted to reconnect. She wanted to be left the fuck alone until she was ready to emerge from her post kitty cave and join us on our cushy human bed.

This time, once again, I coerced. I lay flat against the hardwood floor and used my go-go-Gadget reach to snatch her out from under her not-so-secret hiding place. She switched her tail, but the resistance seemed lackluster and, ultimately, she relented.

Something seemed off. It wasn’t her indifference to our return–that was expected. Nor was it her hunkering down under a bulky piece of furniture–that too could be anticipated.

It was an addition to her wardrobe. A blue collar with small, colorful bells adorned her neck. She was not wearing it when we left the week before.

When Coco was a wee one, she blew through a few breakaway collars, all of which included engraved tags with her name and my cell phone number. The longest she kept one on was about two hours.

Since she is microchipped, I never much worried about her collar ID. She was a freedom-loving hippie cat who wandered the streets naked.

“Aww, CS must have given her a jingly collar when she checked in this week,” I said. “It’s just strange that she didn’t mention it, though.”

We let her keep it on all night, and to our surprise, she did not attempt to rip it off, even though it looked almost uncomfortably snug around her plump winter coat. 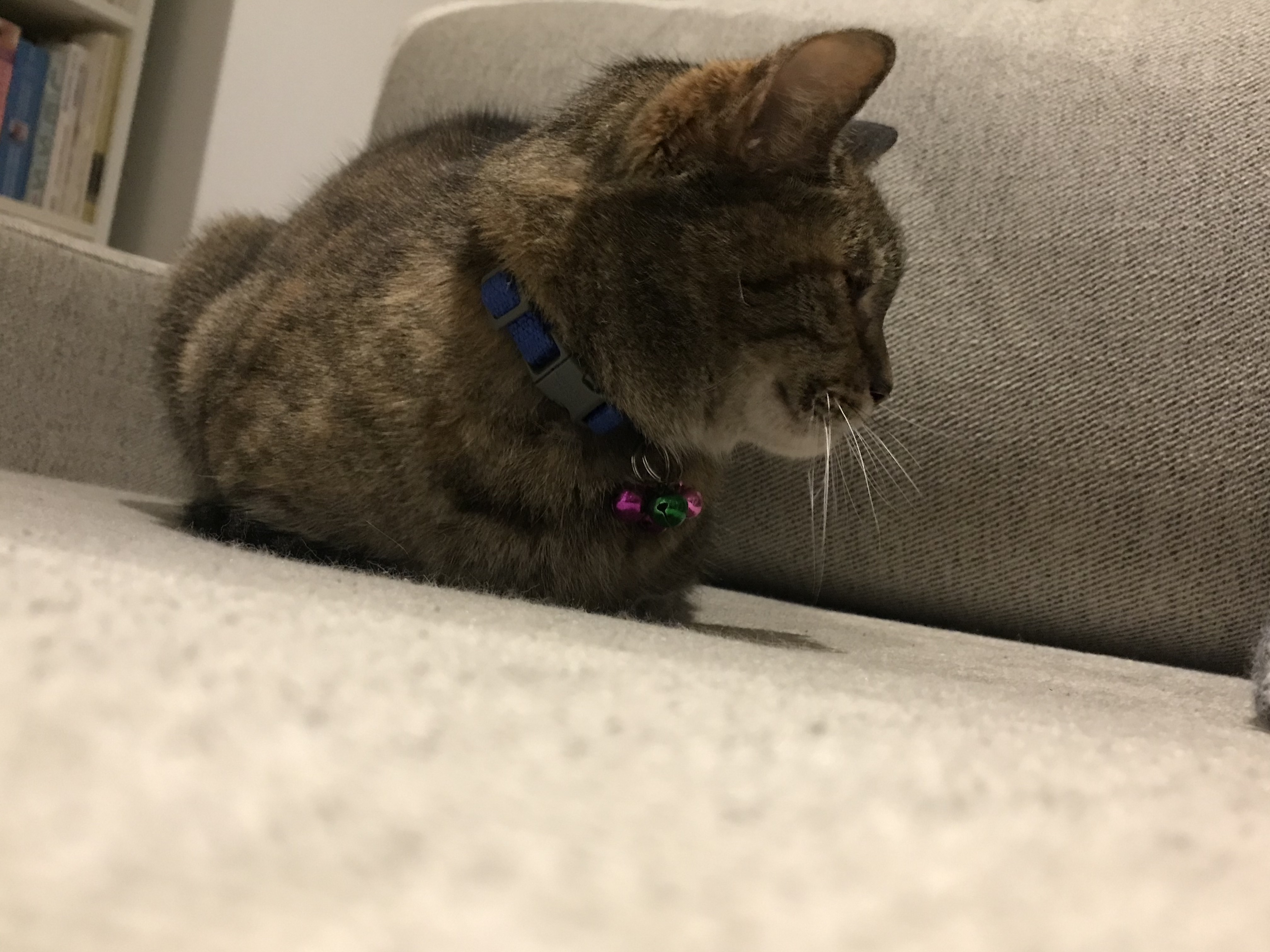 The next morning, Coco still jingled and jangled like a Salvation Army volunteer outside of Macy’s. I snapped a photo and sent it to CS, pointing out the new bling.

She replied, “Did you get her that collar? Or did she have it on when you got home??”

I wrote back, “Wait, I thought that you got it for her!”

CS confirmed that she last checked in on Coco sometime on Saturday and there was nothing but fur. We returned Tuesday night and were greeted with aloofness and bells. Something happened in that three-day span. Someone gifted my cat a multicolored collar.

I raced home after that revelation and immediately removed it.

I’m curious now, though, if someone in my neighborhood wants to claim her for their own. I mean, I can’t blame them, but she does have a home. I’m happy to share her time, attention, and death glare with the entire block if anyone on it wants a piece of that feline fickleness.

It does, after all, take a village.