The 33rd annual Montreal International Jazz Festival kicked off its festivities north of the border on June 28 and continued through July 7. For 10 days and nights, music, stages and crowds dominated several cordoned-off blocks in the city’s downtown area. Throngs of festival goers filled sections of Sainte-Catherine Street and De Maisonneuve Boulevard, nibbled snacks from street vendors and enjoyed an array of indoor and outdoor performances of musicians from around the world.

In 1980, the first Montreal International Jazz Festival featured Gary Burton, Chick Corea, Ray Charles and Vic Vogel, and attracted about 12,000 people. It now boasts some 3000 artists from about 30 different countries and more than 2 million attendees. Holding the 2004 Guinness World Record for largest jazz festival, the event has steadily grown in popularity and increasingly pushed the boundaries of jazz music.

Associated more with reggae, folk, pop and other genres besides jazz, such artists challenge traditional views of the musical concept. Since its humble beginning, the festival has introduced a growing number of musicians who crosscut various musical scenes. “Jazz” in Montreal has a multitude of names and faces.

André Ménard, the festival’s co-founder and artistic director, emphasizes the array of musical talent in an article featured in the festival program and schedule. He writes, “Once again, our musical menu unveils a kaleidoscopic diversity in a comprehensive program … Our programmers wore out their eyes, ears and shoe leather scouring the ends of the (musical) Earth.”

Patrons of the event have observed the expanding repertoire of performances over the years and how they fit into the “jazz” category. Julian Woods, a longtime resident of Montreal, has attended various shows at the festival for the past 15 years. He believes that the music featured, based on his definition of the genre, “goes way beyond ‘jazz’.”

Woods admits that his perspective may be stricter than that of others. He says, “When I think of jazz, I think of Dixieland jazz, blues, R&B, swing and traditionalists like Duke Ellington and Miles Davis.” He believes that the festival fits more of a “Wikipedia definition” of jazz, which, he says, includes Latin and African rhythms, among others.

Despite the name, says Woods, the week-and-a-half long festival transcends its tunes. “The Montreal Jazz Festival is about more than just the music,” he says. “It’s about the ambiance, the staging, the ancillary entertainment, the crowds.”

Michel Bonin, a Vancouver-based pianist, entrepreneur and writer for Canada Journal, agrees that the festival offers more than music. He believes that it is as important economically as it is artistically to the Canadian city, attracting tourists from around the world.

“The jazz fest is really promoting Quebec and Montreal. It strengthens the French presence in Canada,” he says. “Besides music, it’s also about architecture, sustainability, city planning and business.”

As such, Bonin views the widening parameters of jazz as a shift toward inclusivity. He believes that the music has moved “beyond jazz.” “It used to be about ‘real jazz’,” he says, “strictly jazz.”

Now, the writer and musician believes that the event is expanding the genre itself and “making it more approachable to those who don’t know it as well.” 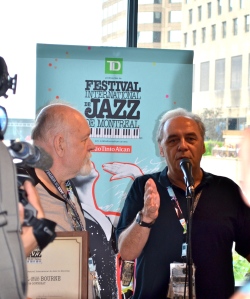 Media veteran Michael Bourne focuses more on the musical aspect of the festival. The New York City-based music reviewer has attended the event religiously for the past 20 years. He views jazz as a continuum that evades an immobile, concrete definition.

Bourne uses the city as an adjective –– describing the festival and its combination of musical performances as “very Montreal” –– to underscore the uniqueness of the experience.

“This festival redefines jazz, but jazz also redefines itself,” he says. “Every generation thinks the new one isn’t ‘real jazz’, but it’s all jazz.”

(This article originally appeared in The Bay State Banner in July 2012.)